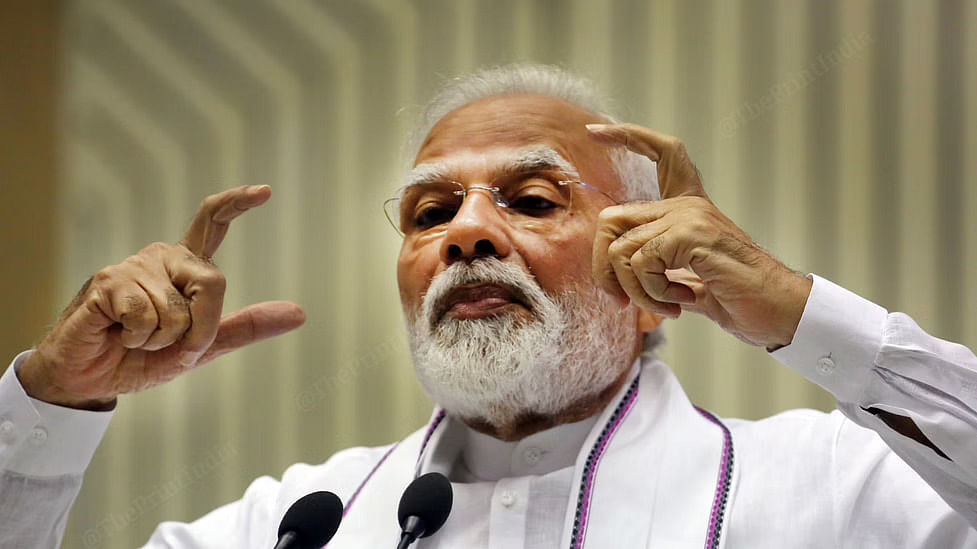 New Delhi: Both Hindus and Muslims perceive news coverage of Prime Minister Modi as biased and there is a stark gap in trust among supporters of opposition political parties on news channels, said a report by Delhi-based think tank Lokniti-CSDS and Germany’s Konrad Adenauer Stiftung.

“Both Hindus and Muslims who consume news through various media sources are equally likely to believe that the Modi government is portrayed too favorably by the news media (46%). Only about one in five news consumers said the media in India provides balanced political coverage—neither is too favorable toward the government/opposition or is it too unfavorable, says the report.

Titled “Media in India: Access, Practices, Concerns and Effects”, the report used data to show how different communities consume news and how the media landscape is changing.

According to the data shared in the report, “Muslim news consumers trust the news media (all types) less than Hindu news consumers, though the order of trust between both communities is the same. Both Hindus and Muslims trust online news websites the least. Their trust in private news channels and AIR – news is also quite low.”

And when it comes to media coverage of PM Modi, both communities seem to be largely on the same page on the perceived media bias.

The extent of trust deficits also depends on political leanings, the report released on Thursday found.

All Doordarshan news channels and media remain the most trusted.

The findings of the report are based on a sample survey of 7,463 Indian citizens aged 15 and above, conducted in January this year across 19 states and union territories, excluding parts of north-eastern Kashmir.

Patterns of news consumption also differed between supporters of the ruling BJP and opposition parties. The report claimed that most readers of English newspapers supported the Congress, while consumers of Hindi news appeared to lean more towards the BJP.

“The percentage of individuals who mostly read the newspaper in English is only about 3 percent. But among this small segment, the Congress enjoys the most support. English newspaper readers were slightly more likely to support the Congress than the BJP. This is not the case among readers who read newspapers in other languages,” the study noted.

The survey respondents were, interestingly, quite divided on the “ethics/morality” aspect of government monitoring of social media content, the report revealed.

“45% of social media users believe there is nothing wrong with it (surveillance) and 40% believe it is wrong. Active users of Facebook and Whatsapp are most likely to worry that their privacy is compromised when using the the two platforms. Signal’s active users appear to be the least concerned about their privacy being compromised when using the app,” the report said.

People have also trusted government services and websites for information, while Google and Yahoo also enjoy trust when it comes to privacy-related issues. Social media companies, on the other hand, are the “least trusted” for privacy issues.

“Social media companies are the least trusted. In fact, they are more likely not to be trusted (38%) than to be trusted (37%). The perception that the government monitors people’s online and phone activities is strongest among active internet users in the North West and North India Many in South India gave a qualified response that the government only monitors some people, not all, the report said.

Social media, while changing the game in the media landscape due to access to information, has come with its own baggage, as it is heavily dependent on smartphone ownership.

By and large, television remains the most popular medium for accessing news across the country, according to the report.

The report also looks at the spread – knowingly and unknowingly – of fake news. Participants in the survey accepted that they received and forwarded news and messages that may not be entirely true.

“Nearly half of active internet users and users of social media and messenger platforms admitted to having been misled by fake news or information online at some point. About two-fifths of active internet users and social media users admitted to having shared/forwarded false information at some point; i.e. they unknowingly and unintentionally shared/forwarded fake news and later realized it was fake.”, the report said.

But recognition also depended on whether the consumer was even aware of the threat of fake news. The more educated respondents were “more likely” to admit to being misled by fake news than those who were not, simply because they remained unaware that what they were sharing was fake.

The gap between town and village

The report also highlighted how people in cities were more interested in national news than what was happening locally.

“The strongest preference for national news was among news consumers from Delhi and Haryana. Rajasthan also leaned more towards national news. For state news, preference was strongest in Assam, Chhattisgarh, Odisha and Andhra Pradesh,” the report said.

Even in South India, consumers are inclined towards hyper-local and international news.

Also read: Thought OTT was king? What if. The survey shows that 70% find “value for money” in good old TV