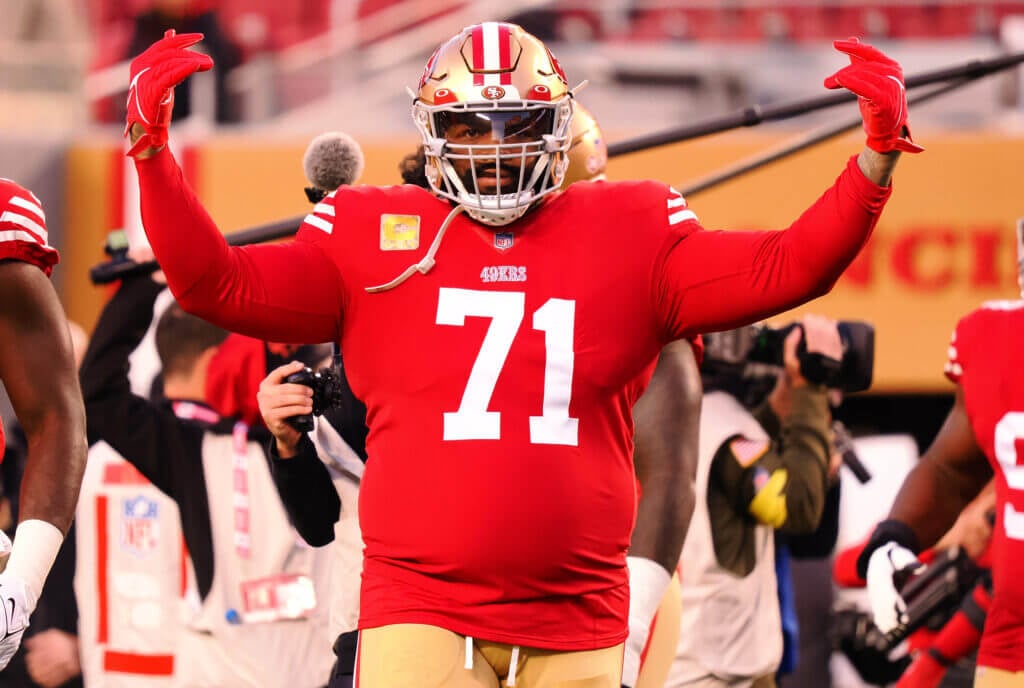 AIR FORCE ACADEMY, Colo. — Trent Williams said concerns about him tipping plays are a much bigger deal on social media than they are on the field.

The 49ers’ veteran left tackle is essentially recognized that defenders can sometimes tell from his stance whether the play is a run or a pass. For example, Bears defensive end Dominique Robinson said earlier this year that his Week 1 kick against Williams was aided by the fact that he read Williams’ outside leg — he kicked it twice — and knew the play was going to be a pass.

However, Williams said Friday that knowing whether a play is a run or pass isn’t a practical advantage because there are so many variables in a play.

“Just because you know it’s a run doesn’t mean you know what kind of run,” he said. “We just installed 50 runs with six different looks for each run. So I could show you running all day. Do you know which of the 50 runs we run?”

Likewise, he said there are times — like on a screen — when an offensive lineman wants his opponents to think a pass play is coming, because then they’ll come over on their pass rush.

Williams has been to nine Pro Bowls and, according to Pro Football Focus, has not allowed a sack this season. During the Week 1 sack at Chicago, Williams initially blocked Robinson well, but quarterback Trey Lance couldn’t find an open receiver and Robinson tackled him as he tried to leave the pocket. It was also a third-and-5 play and thus a likely pass play.

Offensive line coach Chris Foerster wasn’t as dismissive, saying that as a position coach he always tries to make sure players don’t anticipate the play. And he noted that just because Williams doesn’t get beat doesn’t mean a tip doesn’t affect his teammates.

“It’s also, what about (Mike) McGlinchey on the other said where one (defensive) guy says to the other guy, ‘Hey, it’s a pass!’?” Forester said. “Now suddenly there are no drive keys on the other side.”

Defensive end Nick Bosa said he knows some players who play his position are paying attention. But it’s not something he’s ever been concerned about, especially since the 49ers’ system asks the defensive linemen to shoot off the line of scrimmage whether it’s a pass or a run game.

“I’m not big on the pre-snap stuff,” he said. “I know a lot of guys (are). I’m going to watch the formations a little bit and that will help me in the run game.”

Williams said: “If it was the end-all-be-all, it would be a big deal. Because it’s not, it’s just a discussion on social media, and not here.”

• An inch and a half of snow chased the 49ers to an indoor facility Friday as they prepared to play in Mexico City, where it was 74 degrees.

It was still cold inside the Air Force Fieldhouse — the temperature outside was around 15 degrees and most of the players stayed bundled up during practice — but there was no wind, and a pair of heaters on either side provided some respite from the chill.

“It definitely wasn’t as cold inside (the facility) as it was outside,” Williams said. “So I was happy about that.”

The 49ers flew to Colorado so they could better acclimate to Mexico City’s altitude and thus get a leg up on the Cardinals, who arrive in Mexico City Saturday night. But they didn’t expect a cold snap that roughly coincided with their stay, dropping temperatures into the teens on Friday. Sunday’s high here is expected to be 51 degrees, which is about average for this time of year.

“It’s been an interesting journey,” Bosa said. “It definitely tests our strength and our ability to be positive.”

Jimmy Garoppolo, speaking to the media after Bosa, elaborated by noting that there have been a lot of moving parts to the week of practice.

• Linebacker Dre Greenlaw said he hasn’t heard from the league yet about whether he will be fined for his hit Sunday on Chargers quarterback Justin Herbert, one that resulted in a 15-yard penalty and got him ejected.

Greenlaw described it as a “bang-bang” game made even more difficult to judge as Herbert was pushed forward by a tackle from Fred Warner when Greenlaw hit him.

“I remember trying to go in with my shoulder on the hit,” Greenlaw said. “It happened so fast. It came closer than I expected. It was a bang-bang play. I definitely didn’t mean to get ejected or hurt anybody. That’s part of football.”

Defensive coordinator DeMeco Ryans said his players need to know the league is sensitive to big hits on quarterbacks.

• Defensive end Samson Ebukam and Bosa practiced Friday after missing Thursday’s practice. Ebukam has been dealing with a quadriceps injury and was listed as a limited participant on Friday; Bosa was given a veteran rest day Thursday after playing all but two defensive snaps against the Chargers.

Bosa said the fact the 49ers held the ball for nearly 37 minutes against the Chargers allowed him plenty of rest.

Cornerback Charvarius Ward missed his second straight practice while dealing with a personal matter. He was expected to rejoin the team on Friday afternoon, which would allow him to practice on Saturday.

For the Cardinals, quarterback Kyler Murray (hamstring) was limited for the second straight day and quarterback Colt McCoy (knee) practiced fully after being limited Thursday.