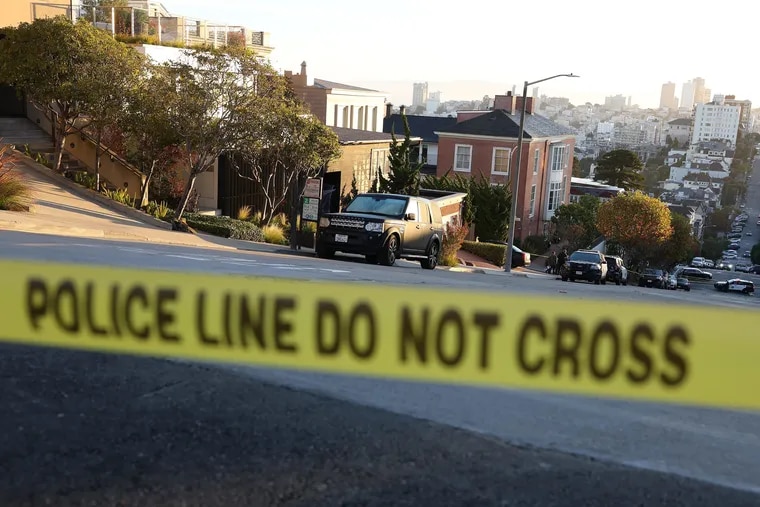 The crime was at least as shocking as the first news bulletins on Friday morning: A man had broken into the San Francisco home of the highest-ranking Democrat in the US government — House Speaker Nancy Pelosi — and ended up attacking and seriously injuring her 82-year-old wife. -old husband, Paul, with a hammer in a bizarre incident.

It is still early in the investigation, and there are sure to be many unanswered questions about exactly how the incident happened. That said, you don’t have to be Sherlock Holmes – or even Inspector Clouseau – to discern the attacker’s motives. It turns out that 42-year-old David DePape left a 15-year paper trail of clues about his right-wing political hatred and misogyny on his blog, including a recent focus on the big lie about election fraud in 2020. The problem is that police say DePape broke into in the residence hoping that the Speaker, who was out of town, would be present and shout “Where’s Nancy?!”

If that phrase sounds painfully familiar, those exact words were uttered by the January 6 rioters who eventually occupied and trashed Pelosi’s office in the US Capitol, even stealing her laptop in the middle of their failed coup. For the past 21 months, the voices of those most concerned about the precarious state of American democracy have warned that right-wing extremists would seek to finish what they started that day. Here is now the most tangible evidence yet that violence remains at the forefront of these growing threats to the American experiment, in the most advanced assassination plot against a high-ranking official in more than 40 years.

Yet 3,000 miles away on the West Side of Manhattan, apparently the editors of the nation’s most influential media outlet, the New York Times, didn’t feel it. When the reporters put out the next day’s front page of the so-called paper of record, Times reporters squashed the attack on Paul Pelosi at the bottom right, with a headline — “Pelosi’s husband badly hurt in hammer attack by intruder” — devoid of any political significance.

Instead, editors at the country’s most widely read old paper rated Elon Musk’s takeover of Twitter, with two articles, and developments surrounding the US economy and Britain’s new prime minister, as well as the deaths of rocker Jerry Lee Lewis and Harlem minister Calvin Butt. as more or at least as important as an attack on our democracy.

Veteran Times watchers noted that the wounding of Louisiana Rep. Steve Scalise in an assassination attempt by a leftist received large text splashed across Page 1, and they also recalled the fateful day in late October 2016 when the paper gave 80% of its front page to a nostalgic twist over Hillary Clinton’s emails.

The problems with shrugging off the political consequences of growing, violent extremism are twofold. A muddled voice from America’s top newsrooms won’t help quell the inevitable right-wing conspiracy theories about what happened in San Francisco that — you won’t be shocked to learn — spread within hours of the news. But the muted response also gave broad license to TV pundits on “both sides” of this assassination attempt when almost all political violence in America, as well as threats to our elections, comes from one side, which is the far-right movement that runs the Republican Party.

“People on both sides should tone down the rhetoric,” a Republican congressman from Kentucky, Rep. James Comer, allowed to opinion on CNN, despite the general lack of such rhetoric or violent attacks from the left. Needless to say, the dialogue was even worse at places like Fox News, where the news somehow bled into its long-running memes about street crime in Democratic-run cities like San Francisco. Musk — who is celebrating his takeover of San Francisco-based Twitter — brought this week’s grim news in full, even responding to a Hillary Clinton tweet about Pelosi by posting a link to a conspiracy theory and writing, “There’s a little possibility that there may be more to this story than meets the eye.”

The media’s general confusion over the Pelosi story comes as arguably the most timely book of the fall — veteran journalist Margaret Sullivan’s Newsroom Confidential, which is part memoir and part message to mainstream media colleagues who respect and actually listen to her — warns that reporters must adopt a new and less passive tone when confronting today’s profound threats to democracy. Now that she’s out promoting her song, Sullivan sees a media that this election season is largely out of step with the moment.

“The news media desperately wants to be seen as fair and unbiased and unbiased, and, you know, those are good goals,” Sullivan said MSNBC’s Mehdi Hasan last week. “But to get there, they’re overly sensitive to criticism from the right and they keep going over the top to try to make it seem like they’re, you know, being fair — and in fact they’re taking things in the middle that shouldn’t taken down the middle. You know, democracy and anti-democracy are not equal things and they should not be treated as such.”

And yet they pretty much treat it as such. The 2022 midterm elections have indeed been unprecedented in many ways, even before the assassination attempt—from the rise of unabashed Christian nationalism to the number of Republicans running for key positions who believe (based on zero evidence) that President Biden was not legitimately elected to the threats against the election that the gunmen patrolling a polling place in Arizona. And yet too many journalists are too eager to cover this race as just another election, or unable to state the obvious.

For example, the media have clearly struggled with the rapid rise of anti-Semitism in our political discourse. When the artist formerly known as Kanye West released an apparently hateful tweet against Jews a couple of weeks ago, a number of major newspapers and TV networks threw out the initial response, using fudge words like “alleged” or “alleged” or “all things considered” to mark an open and shut case of anti-Semitism. Since then, the anti-Semitism has continued to rise, including a “Kanye was right” message on the wall of a college football stadium and a Saturday night comment from the wife of gubernatorial candidate Doug Mastriano attacking Jews because they allegedly do not support Israel as fervently as she and her husband.

On another key issue, mentions of “crime” in the mainstream media have increased dramatically in tandem with a GOP-driven fear campaign to make this supposed increase in urban chaos the No. 1 issue on voters’ minds. There has been little critical scrutiny from journalists to the more nuanced reality that while some crime is clearly up in some cities—Philadelphia’s high homicide rate, for example—incidents nationally are fairly flat and well below levels seen as recently as the 1980s. and the 90s.

Two weeks ago, I wrote a column about the new right-wing group Citizens for Sanity that has raised millions from unknown rich people to cover the baseball postseason with violent, racist, misleading and sometimes false commercials against Democrats doing the infamous 1988 ” Willie Horton ad” seems tame. And I posted the group’s ties to the most violent xenophobes on Team Trump. Since then, mainstream outlets like the Times or the Washington Post have written little or nothing about these ads that could tip the Nov. 8 election. What are they afraid of for?

In this make-or-break moment for America and its 246-year tenure, too many journalists focus on “the trees” by bragging about their fairness and balance, believing they can keep their right-wing critics off their backs, while missing ” the forest” that journalism itself will die quickly if there is no democracy to sustain it.

Based on what I’m seeing in these difficult final days of October, I’m terrified we’ll wake up on November 9th—much like we woke up on another November 9th just six short years ago—and wonder again what the hell. just hit us and why didn’t we see this coming. Then you will probably see some deeply reported stories in the New York Times or on CNN and everywhere else about the death of democracy. And it will all be too late.