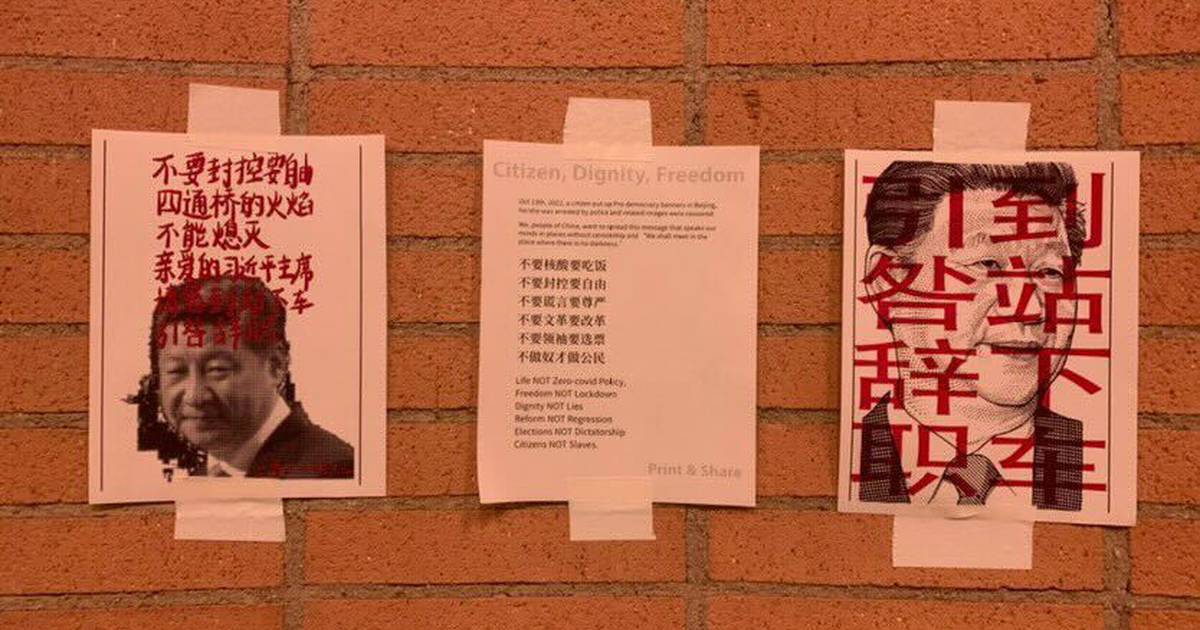 Fighting posters against Chinese leader Xi Jinping have appeared around USC since late October. From lampposts at the intersection of South Hoover and West Jefferson, to billboards at the Law School, to the glass doors of the USC Bookstore, the posters are part of a larger political protest by students at universities around the world.

This movement grew out of an incident in China where an unidentified man in Beijing hung two banners from Sitong Bridge in central Beijing on October 13 to denounce China’s “zero-Covid” policy, which required lockdowns and mass testing to bring down a area to zero infections. Towns and cities were shut down overnight, many desperate people were unable to get food or access to hospitals and appealed for help on social media, and a bus carrying people to quarantine crashed, killing 27 people.

The posters at USC were inspired by the original banners that featured phrases such as “Elections not Dictatorship; Citizens not Slaves.” They claim the regime is authoritarian and call for democratic elections.They also demand the resignation of Xi, who was recently re-elected by the seven-member Central Committee of the Communist Party of China to a third five-year term.

A video posted online shows the man who put up the original banners being taken into custody by authorities moments later. Some journalists focusing on China believe that a Twitter account under the pseudonym “Peng Zaizhou” belongs to the man. The account was deactivated after he was arrested.

China’s online censors sought to remove all digital traces of his public dissent, including discussion groups and social media accounts that spread word of his exploits.

Young Chinese living abroad still found out about this protest and spread the word by posting on social media that Chinese authorities cannot censor, as well as putting up similar posters in other parts of the world, including here at USC.

A USC student who was born and raised in Beijing said in an interview that “We cannot let this hero bleed for nothing.”

The student, who spoke on condition of anonymity for fear of persecution, has been posting anti-Xi posters around campus for the past month. “I don’t know if my parents in China will be adversely affected,” she said. “I might even be imprisoned.”

“No media is free from government interference, but I think the level of interference in China is no longer acceptable… Protesting in China is a very brave and committed act.”

Another Chinese-born Trojan who went to high school in the US agreed. “It is more important that we, Chinese students studying abroad, do something because we live in a more liberal environment,” she said. She explained that she placed dozens of posters around campus one night recently, adding: “If we don’t speak up, should we just expect people in China to sacrifice themselves? We’re taking a smaller risk, so we have to do more. “

Before agreeing to an interview, both Trojans said they were largely silent about their silent protest on campus, telling only their closest friends.

Han Wang is a Chinese graduate student at USC who has been involved in anti-Chinese Communist Party activities for the past two years despite possible consequences at home.

Wang spent several hours marching around campus one afternoon in late October with a large sign showing a fat and naked Xi Jinping along with the words: The Emperor’s New Clothes.

Wang said people smiled at him during his personal protest, and a Chinese girl even took a photo of him and told him it was cool. The response eased his fears of being attacked by extreme Chinese nationalists known as “xiao fen hong” or little pink.

Wang says the poster movement on campus is not a coordinated protest; it is individuals who decide to take action. “I hope that in the future the links between protesters will be strengthened,” he said.

“Indeed there was [a] few Chinese I have met strongly support the Communist Party,” Wang said. “Most Chinese prefer to remain silent because it is the safest course of action, even if they disagree with the government.”

Wang said he hoped political organizations would help unite the disconnected protesters. But other students were skeptical of such an idea.

A USC student wearing a wig and cap as he put up posters alone at night said, “I’ve been so careful because I don’t want my parents who live in China to get into trouble.”

The student, who spoke on condition of anonymity, explained that she is not only worried about Chinese Communist Party sympathizers. She noted that some organizations opposing the Chinese government here are primarily made up of men. She said there are times when she has felt uncomfortable because of misogyny among the group’s male members. “It just doesn’t seem like a safe space for women,” she said.

The Chinese student who attended high school in the United States said that, like many others in similar positions, she does not like the idea of ​​collectivizing the protests, and she is afraid of being reported by tools of the Chinese government in the organization.

She noted that a loved one in China expressed concern when she put up the anti-Xi posters at USC “because she thought I wouldn’t be able to return to China.”

As for Wang, Chinese police have harassed his parents twice in recent years. He said the police went to their home and demanded they sign a statement promising to prevent their son from participating in anti-Communist Party activities again. That hasn’t stopped him.

Several people interviewed said that Instagram accounts such as Northern Square and Citizens Daily CN, which post photos of anti-Xi messages publicly, are reassuring to them because they show that there are like-minded people in the world.

The student from Beijing tried to explain why it is so difficult to make progress. “It’s hard for the West to understand… what it feels like to fight under a regime like this.”

Most interviewees say that it is not enough to put up posters, but admit that they do not see a clear solution to the problems they describe at home.

Wang said: “We need to speak up to form a foundation so that more people can have the courage to make a change.”