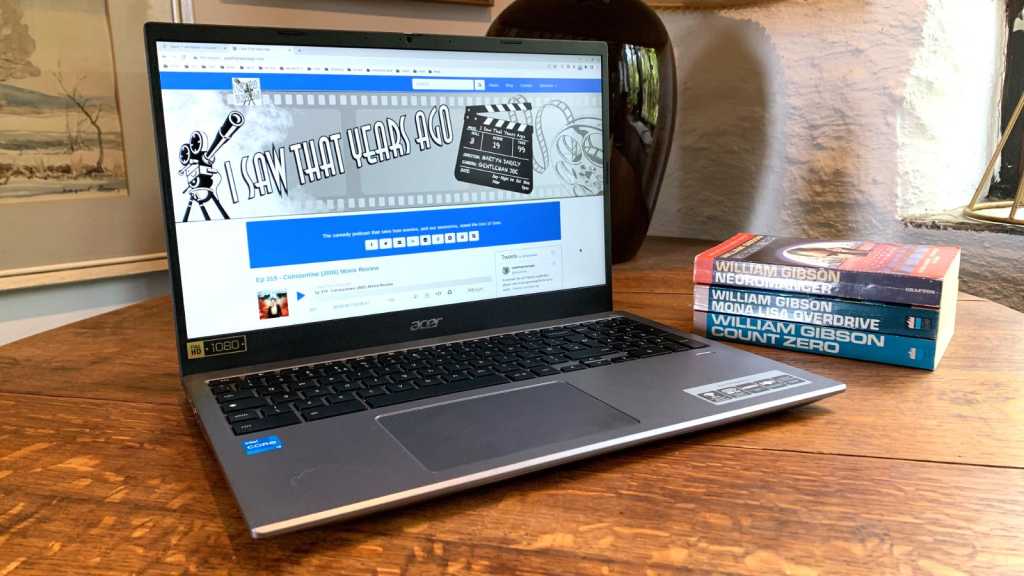 If a big screen is one of your top priorities when shopping for a new Chromebook, the 515 has a lot to offer. You won’t get a standard touchscreen, but the device is fast, has good specs and should last a good few years.

Larger Chromebooks seem to be making a bit of a comeback recently. Most ChromeOS devices you can buy usually opt for smaller formats built around a 13in display, which many people now use as a workhorse in their home, where a larger panel can be a real advantage.

Acer has recognized this new trend and the response is the Chromebook 515, complete with a 15.6in display. But, does bigger always mean better?

The lightweight and compact nature of Chromebooks may surprise you a bit when you first encounter the 515.

It’s a big device in this category, with dimensions that make it something of a surfboard compared to the likes of the HP Chromebook x360 14c, but also like another recent big ChromeOS machine, the Asus Chromebook Flip CX5.

The materials used in the construction keep the weight to a manageable level, 1.7 kg feels comfortable to carry around. Plastic is used for the base, most of the lid is made of metal, and the matte finish is smart and reminiscent of other Chromebooks I’ve reviewed recently.

You won’t find any of the fancy 2-in-1 styling on the 515, as it thinks of itself as a laptop rather than a hybrid, which may be due to the lack of touchscreens. You can push the display down flat on the table if that’s what you want to do, although I’m not sure who it works for or why.

For the most part, it’s a stable setup, but rocking the device a bit has caused the display to lean back, so the hinges aren’t as tight as they could be. That being said, during my time with the device I didn’t experience any issues with the angle changing on its own.

At the bottom of the 515, there’s a large air vent grill and twin downward-firing speakers to keep things cool. With two rubber feet at the front and a long rubber bar at the back, everything is stable and sits on the table.

When I reviewed the Asus Chromebook Flip CX5, I commented on how adding a number pad to a Chromebook is a mistake, as it moves the keyboard off the center of the display and complicates the ease of use that makes Chromebooks so great.

Acer took a similar approach with the 515 and still leaves me with the same impression. Personal gripes aside, the main keyboard took some getting used to as it’s a bit spongy and not really centered. But after half an hour I picked myself up again and found that I could happily type at near my normal speed.

I’ve made more mistakes than usual, so unless you really want a number pad on your laptop, I’d suggest trying out the Acer Chromebook 515 before buying one (same goes for the Asus).

The number pad itself is fairly usable, though with thin keys that can feel a bit cramped at times. But if you regularly enter figures into Google Sheets or other office software, you’ll find it a very convenient option to use. The backlight also makes typing on the Chromebook 515 possible in the dark.

Underneath the keyboard you’ll find a pill-shaped indentation that houses the fingerprint sensor. This is becoming a standard feature on Chromebooks lately, although I’ve never seen it this thin, but it seems to work well even if more surface area is preferred.

Thanks to the Corning Gorilla Glass panel on top, the touchpad is solid. Pointer movements are quick and precise, the pad itself is a good size to move around. Multi-touch gestures are supported and all work well, with smooth responses for fingers.

Obviously, one of the main selling points of this device is the display. With the Chromebook 515, you get a 15.6in Full HD IPS panel, which offers plenty of space to display web pages, stream entertainment content and work on office documents.

As mentioned earlier, there’s no touchscreen capability on this laptop in the UK, which is a bit of a shame, but it does mean you get a slightly glossy screen that doesn’t suffer from glare as much as it does with touch-enabled panels.

A Core i3 model with a touchscreen is available in the US for an additional $50.

Display quality is good, with sharp definition and color, although the latter can sound a bit muted at times. The matte screen eliminates glare and glare, making it ideal for outdoor use, with a high brightness rating of 320 nits as this is not a strong backlight to cope with the sunniest days.

Acer is positioning this device for ‘hybrid’ workers (those who work at home and in the office), so there’s a good chance it’ll spend its life on the desk in the back bedroom. Indeed.

Above the display, there’s the standard webcam for video calling, another essential feature for the modern hybrid worker. Acer doesn’t disclose the camera resolution, but Google Chat offers 720p as the maximum setting, so I think it’s safe to assume this is the actual maximum resolution.

If you have enough light, you’ll get a good picture on the calls, but it’s very easy to overpower the camera with strong light sources, which destroys the touch surface.

Basically, if you sit near a window while on a call, it looks like there’s a bright spotlight shining on your face. If you want to protect your privacy when you’re not using the camera, there’s a physical lens cap that you slide to cover the camera. Simple, but effective.

Thanks to DTS Audio and Smart Amplification features, the twin speakers are able to produce incredible volume without any distortion when the volume is at its loudest.

High frequencies are definitely more prominent, bass is lacking as usual for a laptop, but a little light for streaming video content and listening to music, it serves its purpose.

Acer opted for a 3GHz Intel 11th Gen (Tiger Lake) Core i3 processor in the Chromebook 515, which is decent silicon that can handle the demands of ChromeOS well.

Without touch, there’s no point in using the Chromebook 515 for games as they’re primarily touch-oriented. But I didn’t notice any lag or other issues when working on Google Office software, streaming Netflix content, or having multiple tabs open while using Chrome.

The processor is supported by 8GB LPDDR4X RAM and 128GB PCI-Express SSD for storage. Since ChromeOS is a lightweight operating system, this whole combination can be considered a little excessive for a Chromebook, but I have no complaints, and if you want to open up the device to use Linux applications, this extra oomph will definitely be useful for desktop-class software.

In the US, both the Core i3 and i5 models are available now, arriving in the UK in Q3. Acer’s website also mentions a Core i7 option but I’m told this won’t be released in the UK.

To see how it compares to some of its rivals, here’s how the Acer Chromebook 515 fared in our standard benchmark tests:

With its larger frame, the Chromebook 515 has room for some ports that you don’t always see on Chromebooks. These include a full-size HDMI port and a microSD card slot.

In terms of connectivity, the 515 has some great appointments. Wi-Fi 6 keeps things online perfectly (as long as you have a Wi-Fi 6 compatible router, of course), plus Bluetooth 5 is available for connecting to speakers and other peripherals.

Acer doesn’t reveal the size of the battery in the Chromebook 515, but it does say it’s a 3-cell, lithium-ion type with a maximum power supply of 65W. You won’t get this out of the box as the charger included in the box is rated at 45W.

The company claims 10 hours of battery life per charge, but in our looped HD video test I saw the battery go from 100% to zero in 8 hours.

This is a bit disappointing as the Asus Flip Chromebook CX5 ran an hour and forty minutes longer. You’ll still get through the workday, but you may need to charge the device if you want to use it in the evening.

That supplied charger gets you from 0- to a reasonable 39% in a typical 30-minute test.

If you’re not sure what a Chromebook does in terms of software, it’s not Windows or macOS, but Google’s own ChromeOS.

If you’re familiar with the Chrome browser, it will look instantly familiar. Thanks to the simple nature of the operating system, it’s easy to find and often a good choice when recommending devices to family members who don’t know much about computers.

Providing remote tech support is easy thanks to some built-in features like Chrome Remote Desktop.

Google has great software that works on Chromebooks, such as the Office suite (Google Docs, Google Sheets, and Google Slides) and other personal productivity apps like Google Keep, Google Tasks, and Google Calendar.

Of course, you’re not limited to these, and you’ll find many more options in the Chrome Web Store. You can run many Android applications on a Chromebook, and as we mentioned before, there is an option to configure Linux.

Add these together and you should have all the bases covered, and it won’t cost you anything extra.

Alongside the version I tested here, you can choose to move up to more powerful processors, with the top option being an Intel Core i5, as well as more storage and RAM.

Although, if you’re not looking for a large display, you’ll find plenty of great deals in our roundup of the best Chromebooks.

The Acer Chromebook 515 is a great offering for those who need a large display and plenty of power for general ChromeOS functions.

The absence of a touchscreen in the UK (and only on the i5 models in the US) will be a downside for some, but the lack of brightness on the screen may make up for it.

Acer is positioning the 515 as a Chromebook for hybrid workers, and I can see how this could be a very useful device to have on your desk at home, although it might struggle outdoors due to its dim display.