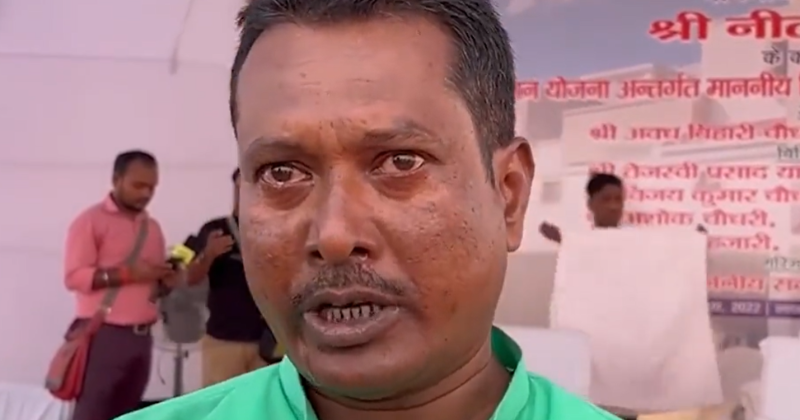 A video has surfaced online in which Rashtriya Janata Dal (RJD) MLA from Bihar’s Alauli, Ram Rakesh Sada, gets emotional after handing over the keys to a government residence in Patna.

Sada, who is also the poorest MLA in the Bihar Assembly, was recently allotted a three-storey residence at Bir Chand Patel Path in Patna.

After getting a new house, MLA broke down.

In the video, Sada can be seen getting emotional and struggling for words as he was overwhelmed by the government’s gift.

Why did this Vidhayak Fak-Fik start crying as soon as he got the official residence? | Unseen India pic.twitter.com/CqGFUX9Xvf

“I am the poorest MLA in Bihar. Whenever a poor person gets something, it is Diwali for him. Now that the chief minister has handed over the keys to my house, the house I am looking at Yes, I have never dreamed in my life, that’s why I am getting emotional. I come from a caste. Lalu Prasad Yadav made me a leader and an MLA,” said Sada in the viral video. can be heard saying.

Lived in a two-room house.

Sada, a first-time MLA, lives in a two-room house in his village Rawan in Khagadia, built in 2004 under the Indira Awas Yojana, and shares it with his family of five sons and a daughter. Included.

Sada was among the eight MLAs who got possession of their houses as part of the Bihar government’s Housing Project for MLAs.

For more news, sports and current affairs from around the world, please visit India Times News.