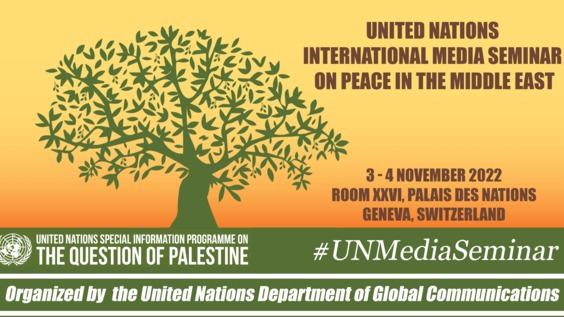 The event will bring together journalists, media experts, think tanks, diplomats and academics from Israel, the State of Palestine, the Middle East region, Europe, the United States and other parts of the world to discuss media-related issues and trends linked to the Israeli-Palestinian conflict. The event also seeks to sensitize public opinion to the issue of Palestine and promote a peaceful solution to the Israeli-Palestinian conflict.

Opening of the session

– Tatiana Valovaya, Director General of the UN Office in Geneva

– HE Cheikh Niang, Permanent Representative of Senegal to the United Nations, Chairman of the Committee for the Exercise of the Inalienable Rights of the Palestinian People

– Mr. Gideon Levy, Columnist and Member of the Editorial Board, Haaretz

– HE Dr. Riyad Mansour, Permanent Observer of the State of Palestine to the United Nations