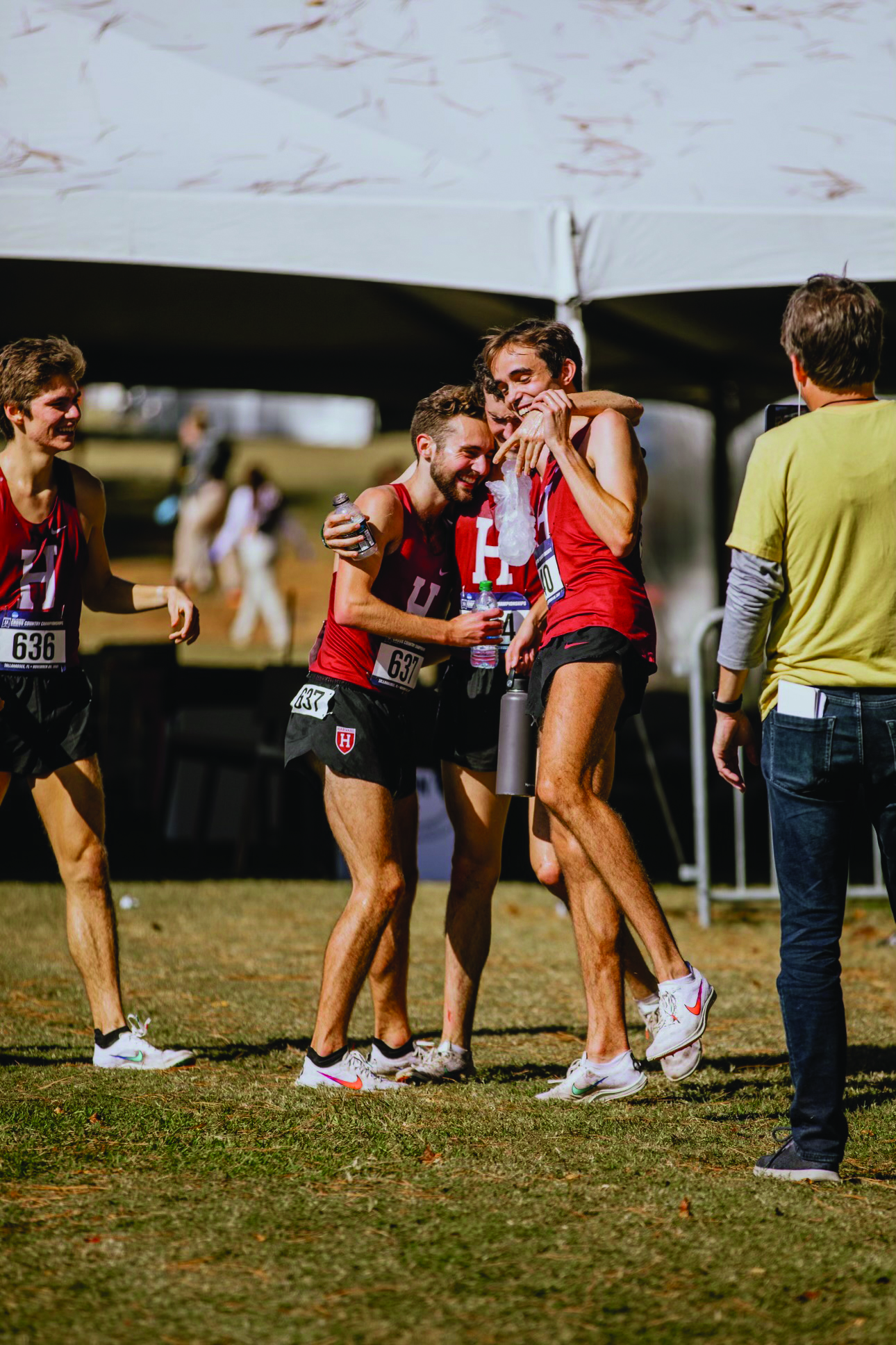 At this weekend’s Ivy League Heptagonal Championships in Van Cortland, NY, the women’s cross country team is ranked 25th in the nation, defending their honor as Ivy League champions for the second year in a row, while the men’s team fell to a runner-up finish. Three points short to Princeton. Two top-ten finishes and five top-eighteen finishes along with junior Maia Ramsden’s individual title gave the Crimson women the scoring depth needed to secure the win. The men’s team was led by the outstanding performance of Asher Iverson and Graham Banks, which was the Ivy League champion and runner-up.

Harvard’s first five finishers in the 6k all placed in the top 18, giving the team a total of 54 points. Sophomores Elaney Matarese and Isabelle Goldstein placed 17th and 18th with times of 21:42.6 and 21:43, respectively, while freshman Penelope Salmon was 12th in 21:32. Senior Maya Reil finished sixth with a time of 21:11.7, while Ramsden finished as the Ivy League champion with a time of 20:42.4.

The women’s team is much smaller than it was this year after losing several seniors, and the team has adjusted its thinking accordingly.

“The seniors knew how to set big goals and how to communicate their importance. [means] to win a championship,” Ramsden said. “This year, we had to be more self-aware because we were all younger. And I think the problem we lost in the season was how to create that mentality with the new team and the new environment.

In addition to Ramsden and other upperclassmen stepping up to fill the role of retiring seniors, they have the opportunity to become one of the few programs where the same coaching staff works with both the men’s and women’s teams.

“I think [the coaching staff] He is a great asset to our team,” said Ramsden. “Our coaches do a great job of making sure we’re peaking at the right time and mentally and physically preparing for the tournament.”

For the first time since 1969, Harvard’s runners went 1-2 at the Ivy League Men’s Championship, and those results speak for themselves. Five athletes finished in the top fifteen for the Crimson men. Iverson was at the top of the pack with a first place finish of 23:59.3 in the 8K, followed by Balanks with a time of 24:04.1. At age 80, Iverson became the 13th Harvard running back to win an Ivy League title and is no stranger to dominating the Ivy League. During the 2021-22 season, he won the 3k and 5k and the 5k and 10k at the Ivy League outdoor track and field championships. David Melville and Vivian Heinz finished eleventh and twelfth in 24:32.9 and 24:33.4, respectively, while Ben Rosa rounded out the Crimson’s top 5 in 15th in 24.36.9.

The Crimson entered the tournament with a different strategy this year; While trying to dominate the race quickly and early, this year they chose to take a more relaxed approach, which was more successful.

“We tried to set the pace, control the run from the start,” Iverson said. “And we’ve noticed that’s not very effective. We were giving free rides to other teams in the race, and they were profiting a lot from our work there. So this year, we stayed calm, relaxed and very patient. We let Princeton and Columbia take it. [the] They lead for most of the runs. And then at about mile four, me and Graham got separated, and they just didn’t let us touch the front.”

Both the men’s and women’s teams look forward to the NCAA Northeast Regional Championships in two weeks.

“Regionals will be on the same course as championships,” Rails said. “So I think having the experience of going through the course will be a valuable thing.”

“We’re in a good position going into regionals this year where most of the field is looking at us instead of the top two teams in the field,” Iverson said. “We decide how we want the race to go, and it’s a good place to be. We can make it go faster, but it’s our choice.”