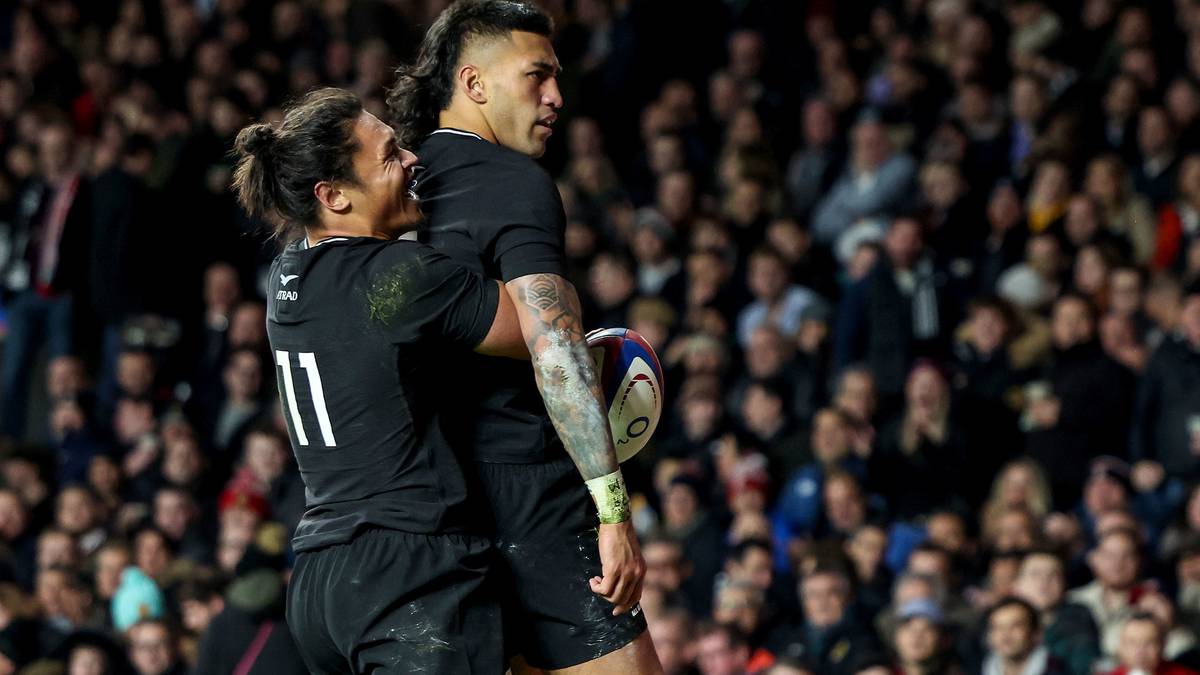 How the British media reacted to the All Blacks’ 25-25 draw against England at Twickenham.

“All Blacks threw it”

Under a dark and forbidding November sky, a finish came to brighten an earlier All Black night. Three tries in the final eight minutes of a game that had seemed well beyond England’s reach changed the entire complexion of the evening and threw up one of the more unlikely game-saving heroes. Substitute Will Stuart will never top this, his two tries rescuing a draw from a heavy defeat.

The All Blacks will be wondering how on earth they threw that away. They haven’t been seen in south-west London for four years but for large parts of the game it felt just like old times. Direct carrying, hard pressure on England scrum-half Jack van Poortvliet, a clever mix of diagonal cross-kicks and clever running angles combined to give them the kind of advantage that would usually see them home. Fair play to England for keeping going and confounding the laws of rugby gravity.

“One Last Second of Despair”

The Twickenham crowd didn’t know whether to dance or cry. They were emotionally spent. It was 70 minutes of frustration, 10 minutes of elation and one last second of despair.

After one of the worst performances of Eddie Jones’ tenure, they staged one of the greatest comebacks in Twickenham history. Three tries in a matter of minutes changed the mood from a funeral to a festival, with Will Stuart the unlikely hero.

To be honest, the only fitting way to end this absolute rollercoaster of an All Blacks year is with a draw.

Chat with you at noon on @NewstalkZB

“One of the great comebacks”

New Zealand weren’t perfect, but the way they played with England’s minds through their defensive schemes, used their kicking game to stretch England in defence, and then went through the guts and ripped a rib out of England in the middle. The first half was an absolute shellacking by New Zealand.

Where would England go in the second half? I found myself remembering France’s great comeback here in 1999 against New Zealand in the Rugby World Cup semi-final. Comebacks like that don’t come around very often. But as it happens, England produced one out of nowhere.

OK… so why on earth did Marcus Smith just start it up? Back off guys. How many opportunities in your career do you get to beat the All Blacks in front of a packed Twickenham?

The debriefing will be difficult for both England boss Eddie Jones and Kiwi counterpart Ian Foster.

For the most part, New Zealand were everything you’d expect them to be at their best.

They played smart, sparkling rugby, quick in their heads and hands. Their decision-making was clear and quick, in contrast to England’s confusion and hesitation.

But England’s spirit and belief survived and flared up late on as their opponents faded.

The hosts will know that more complete, consistent performances will be needed to compete for tournament promotions against the world’s best.

Why did England leave it so long? In the space of nine breathless, mesmerizing minutes that sent Twickenham into raptures, Eddie Jones’ side belied their reputation as limited finishers to force one of the most unlikely draws in their history. When Will Stuart took over for his second attempt at the death, the ground was engulfed in scenes of eye-popping, bee-throwing delirium. Against all odds, this team had rediscovered their strength, erasing a 19-point deficit to the fearsome All Blacks with a final act of devastating precision.

It was a dizzying shift in momentum. Although the fans sounded almost deflated when Marcus Smith kicked the ball out at the end to equalize – they had pleaded for England to push on for victory – they could not help but be alarmed by the plot dispute. For 71 minutes, the All Blacks were superior in every department, from Jordie Barrett’s inspired kicking to Rieko Ioane’s flashes, from Sam Whitelock’s second-row leadership to Mark Telea’s superbly accurate defensive work. And yet when Beauden Barrett was shown a late yellow card for pinning Smith to the ground, England finally found their groove with a trio of superbly taken tries.

Ridiculous last 10 minutes of England Rugby against the All Blacks..the game was done and dusted..NZ 14 points up..man his tie..England literally start the game with nothing to lose..25-25.

It was only fitting that the most unpredictable season of modern times should end with the All Blacks heading to Twickenham and giving mixed feelings about their prospects in 2023.

At Twickenham they were good, bad, indifferent. They beat England at times, out-thought them, out-guessed them and somehow exploded in the final 10 minutes to give them a free pass back into the game.

How England managed to finish with a change of the stocks will be something for the All Blacks to think about on repeat all the way back to New Zealand and for the rest of the summer.

They committed an amazing collapse: winning the game and then finding a way to lose it.

England, who have been down for large parts of the match, are happy to take a draw.

For the All Blacks though, this will be a deflating result that they drop.

Led by their transformed group, the All Blacks should have changed the complexion of their turbulent season. Instead, they have to think about what if. The chance to provide definitive proof that they are transformed slipped through their fingers when it mattered most.