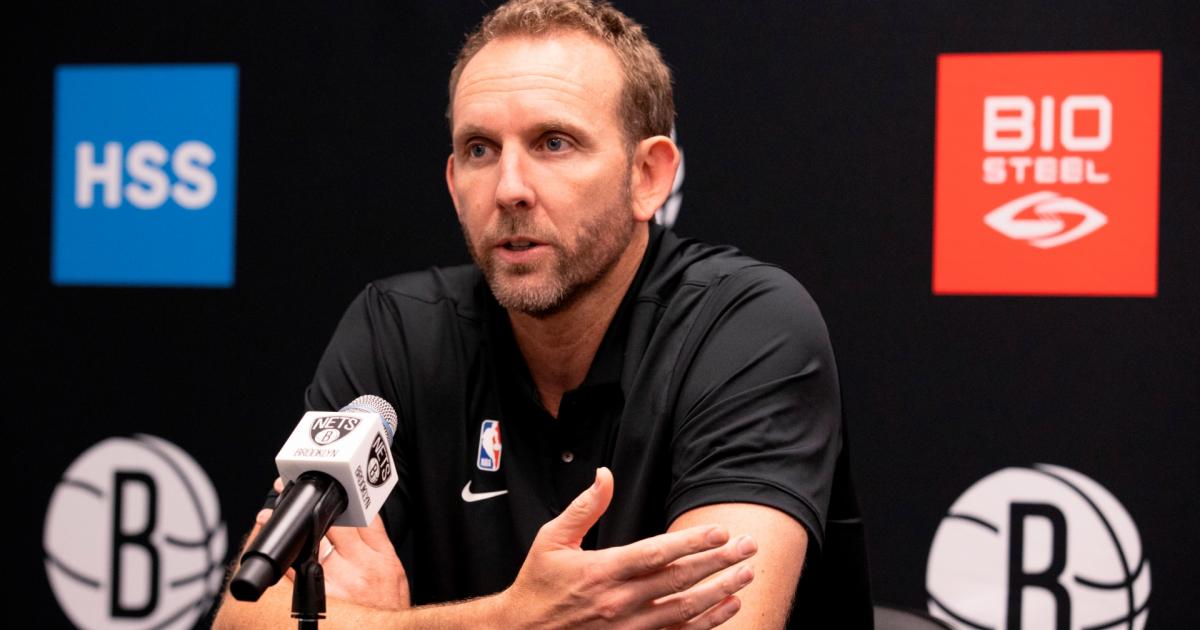 The Nets were at the center of NBA news on Tuesday after reaching an agreement to part ways with head coach Steve Nash.

Nash made a statement on his personal Twitter account thanking the Brooklyn front office for the opportunity to coach the Nets.

It was immediately reported that assistant coach Jacque Vaughn would take over the head coaching role on an interim basis, but that news was quickly overshadowed by the prospect of Nash’s potential full-time replacement.

MORE: Who Is Jacque Vaughn? Get to know Nash’s temporary replacement

Several reports are proposed that the Nets plan to hire suspended Celtics head coach Ime Udoka as Nash’s replacement, but nothing has been confirmed on that front.

After agreeing to part ways with Nash, Nets general manager Sean Marks spoke to the media and answered questions about everything from the head coaching situation to Kyrie Irving’s latest press conference mishap.

Take a look at what Marks said.

What did GM Sean Marks say at the Nets press conference?

Indicates if any players had input on Nash’s departure

“There was zero input from any of the players on this,” Marks said. This was a decision that… we didn’t need it. Steve didn’t need it. I have spoken to Joe (Tsai) about this, but the players were not consulted. They were told beforehand that that was the direction we were going in today, but I didn’t think we needed that input right now.”

Over the summer, there were reports that superstar Kevin Durant gave the Nets an ultimatum – me or Nash. While this would suggest he (or Irving) had some say in Brooklyn’s decision, Marks said otherwise.

Noting that Jacque Vaughn is stepping in as head coach

“It’s an easy choice for him to step into that spot right now. I commend him for that. It’s not an easy day for the coaching staff.”

This is not the first time that Vaughn has served as the interim head coach for the Nets. When the team and former head coach Kenny Atkinson agreed to part ways in 2019-20, Vaughn stepped in and led the Nets to a 7-3 record in 10 games.

“No. Absolutely not, no,” Marks said firmly.

“There are several reports in the media that you have already decided who your next head coach is. Have you?”

Several reliable NBA reporters have suggested that Brooklyn is already moving toward hiring suspended Celtics head coach Ime Udoka, but Marks is denying those reports as of now.

“The candidates that we are looking for will bring that [competitiveness]. That will be one of their traits – competitive and having a voice to be able to hold guys accountable, Marks said.

“I’ll be honest, we have a window here and when we have this group of players and this salary cap and where we are, we hope to achieve [a championship]” Marks said.

“I think we’ve all seen what’s happened over the last few years. There’s been a lot of teams that at one point looked a certain way, then made some moves and things changed. We hope to be one of those teams through to arise at the decision we will make in the next few days and we hope that will be a catalyst for a turnaround.”

“He didn’t do media (on Monday) and he won’t do media (on Tuesday). At some point he will do media again.” Marks said of Irvingwho had a row during his media availability on Saturday after defending his social media posts about a film with an anti-Semitic message.

“We don’t want to make any more fuss right now. Let’s let him simmer down and let cooler minds prevail,” Marks continued. “I think everyone knows he’s going to have to answer these questions [about his social media posts] at some time.”