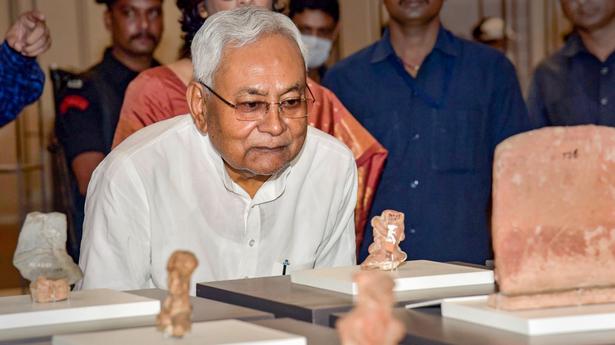 The opposition RJD says it is ready to embrace the chief minister if he pushes the BJP.

The opposition RJD says it is ready to embrace the chief minister if he pushes the BJP.

As the political storm seems to be brewing in Bihar, Chief Minister Nitish Kumar on Tuesday called a meeting of Janata Dal (U) MPs and MLAs to discuss his party’s and the state’s future after the resignation of former national president RCP Singh. The situation can be discussed. On very bitter terms from the party.

Mr. Singh, a former Union minister, resigned on Saturday after the JD(U) sent a notice seeking clarification on the corruption allegations leveled against him.

The announcement of the meeting is a defining moment in the fluid political situation now emerging in the state regarding the National Democratic Alliance and the relationship between the BJP and the JD(U).

JD(U) national president Rajeev Ranjan Singh, alias Lalan Singh, did not react to speculation that Mr Kumar might be out of the alliance, although sources said Mr Kumar had spoken to Congress President Sonia Gandhi. Sunday evening, but there was no official word from the Congress on this.

The Chief Minister has called a meeting of party legislators yesterday. [Tuesday] To get their views on the situation after the RCP incident,” said Mr. Singh.

However, on Sunday, Mr. Singh used sharp words to describe certain “conspiracies” against the JD(U), one of which, according to him, was the Lok Jan Shakti Party led by Chirag Paswan. Bihar was contesting the assembly elections alone, and the vote turned out to be decisive, reducing the JD(U)’s tally to 43 seats (currently 45 seats).

Read this also JD(U) says she will not join Union ministry; Counter attack on RCP Singh

The JD(U) believes that this was a covert attempt by the BJP to reduce JD(U)’s tally during the elections. Referring to Mr. RCP Singh, he said, “There is another shadyantar (conspiracy) which we will also unearth.

Steel’s exit from the former Union minister’s cabinet and later from the JD(U) is seen as his growing closeness to the BJP at the expense of the JD(U), which led to his re-election. The nomination was denied. The Rajya Sabha which retained its continuity in the Union Council of Ministers.

This incident and a few other incidents before it have led to growing mistrust between the BJP and JD(U). Mr Kumar skipped at least four meetings called by the central government, including the swearing-in ceremony of President Draupadi Murmu, to signal his displeasure.

Making things interesting, the Rashtriya Janata Dal (RJD), the former ally of the JD(U) and the single largest party in the Bihar Assembly, on Monday indicated that it would “not support” Mr Kumar and his party. “Embrace”, while another former ally Congress convened its legislature party meeting in the state.

Read this also Tyagi says that whatever decision is taken under Nitish’s leadership will be accepted by everyone in JD(U).

RJD national vice-president Shivananda Tiwari said the two parties calling a meeting of lawmakers on Tuesday was a clear indication that the situation was “unusual”.

“Personally, I am not aware of the move. But we cannot ignore the fact that both the parties, which had enough numbers to secure a majority, have called such meetings when the assembly session is about to begin. No,” said Mr Tiwari.

“If Nitish chooses to end the NDA, we have no choice but to embrace it (wet). The RJD is determined to take on the BJP. If the chief minister “If we decide to join the fight, we have to take them along,” he said.

On whether the RJD would be ready to forget the bitter past, such as Mr Kumar’s return to the NDA in 2017, former chief minister Lalu Prasad and his family members, including younger son and heir Tejashwi Yadav “In politics we cannot remain prisoners of the past,” Mr Tiwari said, referring to corruption allegations against him who was then his deputy.

“We socialists started opposing the Congress which was in power at that time. But, even the Emergency imposed by Indira Gandhi was imposed by invoking the Constitution,” he said.

Congress MLA Shakeel Ahmed said parties with “like ideologies” should come together. He dismissed reports that the Congress’ growing estrangement from the RJD and the Left in the state would stand in the way of a joint alliance.

He said that we were part of the opposition’s joint Pratirudh rally recently.

CPI(ML) general secretary Dipankar Bhattacharya said his party, with 12 MLAs in the Bihar Assembly, is ready to support the JD(U) if it ditches the BJP.