The British-era Patna District Magistrate’s office building, a part of the centuries-old collectorate campus, which was featured in key scenes in the Oscar-winning film ‘Gandhi’, has been demolished, leaving heritage lovers and Gandhians in awe. A wave of sadness has flowed through me.

A few days ago, the beautiful two-storied Central Patna Collectorate building on the banks of the river Ganges was bulldozed, reducing it to a skeletal state.

On Wednesday, workers lifted bricks from mountains of rubble that had accumulated near the remains of the old building, which was once the seat of the district administration and was said to have been built in the early 20th century.

The building was also decorated with a spiral staircase made of iron which was installed on its western face.

The city’s heritage lovers had earlier appealed to the authorities to save its historical artifacts, such as old safety vaults, clocks and furniture, hanging skylights, a spiral staircase, a vintage steam roller, and a very old printing press. , as there are buildings upon buildings. Phase-wise demolition of the Collectorate campus was announced.

A local resident near Collectorate Ghat said, “Demolition started the day Ganga Drive was inaugurated, and I heard the sound of bulldozers falling even late at night. It was a strong British-era building.” ” on condition of anonymity.

Bihar Chief Minister Nitish Kumar on Friday dedicated to the public the first phase of the ₹3,831 crore expressway on the banks of the Ganga – ‘JP Ganga Path’ – dubbed the ‘Marine Drive of Patna’. The elevated roadway passes in front of the collectorate ghat, and will eventually connect the 20-km stretch of Digha to Didarganj. 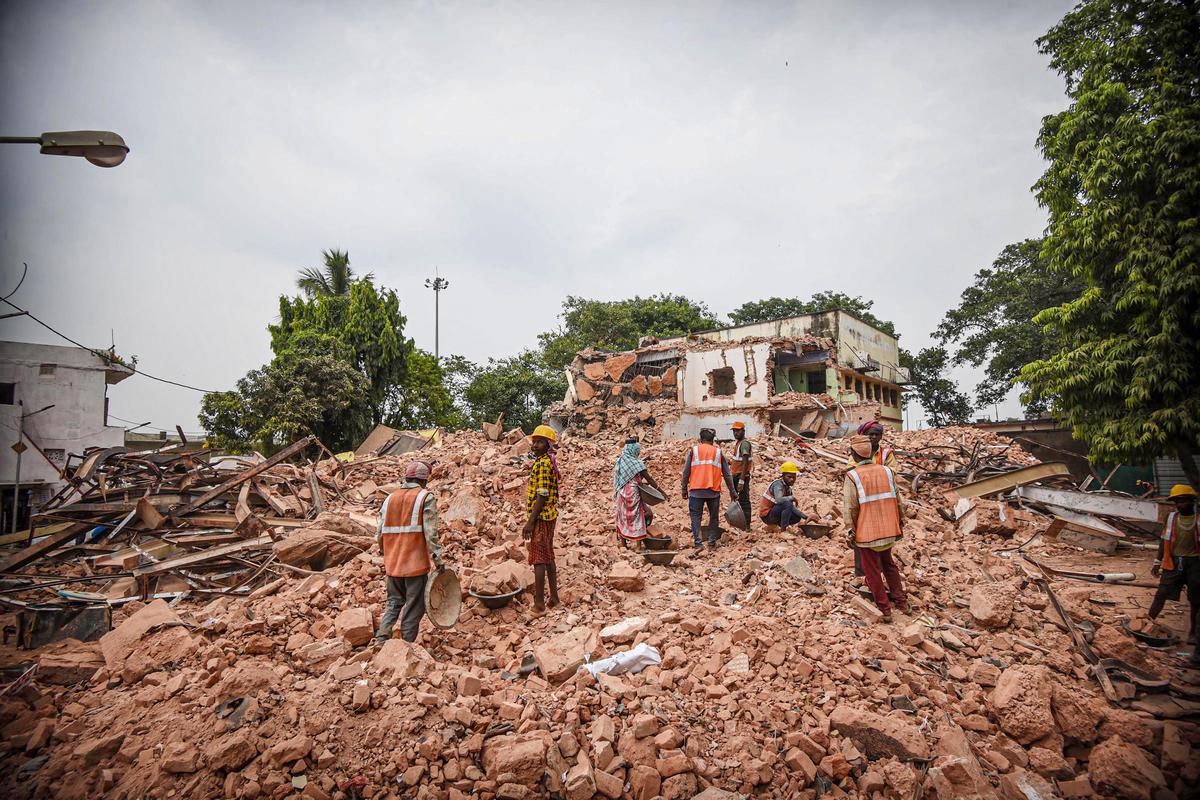 Construction workers amid the rubble of the District Magistrate’s office building at the Patna Collectorate campus, June 29, 2022 | Photo credit: PTI

On May 13 this year, the Supreme Court rejected a plea by heritage body INTACH, which had been waging a legal battle since 2019 to save the landmark from demolition, paving the way for the demolition of the Patna Collectorate complex. happened

Demolition began the next day, and the District Board Patna building built in 1938 was the first to be bulldozed.

Its famous meeting hall, adorned with ancient-looking pilaster Corinthian columns, was demolished by May 17, as was the century-old land acquisition office building in the 12-acre complex.

The Dutch-era Record Room building, with high ceilings, large doors and very old and unique ceiling lights, was also demolished on 17 May. A very small portion of the frontage has survived, as has the Record Room Office. Still occupying it.

‘Gandhi’, the multiple Academy Award-winning film – including Best Picture and Best Director – depicted the record room building as Motihari Jail, while the DM office building was the site of MK Gandhi’s famous Champaran trial. It was decorated as a court for filming. .

Ever since the demolition of the historic Patna Collectorate campus began last month, many historians, scholars, conservation architects, Gandhians and ordinary citizens have expressed their dismay.

GM Kapoor, a veteran Kolkata-based heritage activist and member of the governing council of INATCH, lamented the “brick-by-brick collapse of the historic landmark of the Patna Collectorate”.

“As a nation and as a conscientious society we must respect our history and heritage, otherwise history will not respect us. It is sad that the historic DM office building of Patna is also gone now. The building It was strong and beautiful, a sensitive plan. Could have included it in the redevelopment plan,” he said.

The current move to demolish the collectorate campus comes after the Bihar government announced its plans to build three five-star hotels in the Bihar capital, including one on the site of the centuries-old Sultan Mahal in the heart of Patna. included. Its antiquated structure has sparked public protests.

Ironically, both the Patna Collectorate and the Sultan Palace are mentioned as cultural sites on Bihar Tourism’s official website.

In addition, both the Patna Collectorate and the Sultan Palace, among other places, are listed as heritage buildings in the 2008 Bihar Government publication “Patna: A Memorable History”.

The state government had proposed in 2016 to demolish the old Patna Collectorate for a new high-rise complex, drawing public criticism and appeals from various quarters, including the then Dutch ambassador to India and London. I was also involved in the Gandhi Foundation.

On the occasion of Gandhi Jayanti last year, Octogenarian Razi Ahmed, secretary of Gandhi Sangralia in Patna, lamented that instead of celebrating this landmark as a heritage, the Bihar government had proposed to destroy it in the name of development.

Mr. Ahmed, who once witnessed the shooting of ‘Gandhi’, recalled the “artificial rain” outside the DM office building when ‘Gandhiji’ played by actor Ben Kingsley came from the courtroom. Get out. And in the corridor, acknowledging the crowd on the ground who chanted “Gandhiji, Gandhiji” in emotional respect.