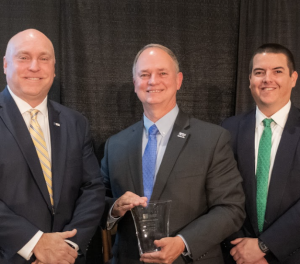 The Northern Kentucky Chamber of Commerce (NKY Chamber) has named Tom Tilmes, Vice President of Business Banking for Republic Bank’s Covington location, as the latest recipient of the NKY Community Award. The award, sponsored by First National Bank of Kentucky, is given to an individual, business or organization throughout the Northern Kentucky Metro region that has made a positive impact in the community.

Tilmes, who will retire later this year, recently finished his service as Chairman of the NKY Chamber’s Egg Issues committee after serving on the committee for over five years. During his time as Chairman, reviews of the popular monthly breakfast event continued to improve.

“I can’t say enough about the difference Tom has made at the Chamber,” said Christie Rogers, Director of Special Events and NKYP of the NKY Chamber. “For example, when the Chamber transitioned to virtual programming during the pandemic, Tom’s leadership was instrumental in ensuring content and programming had the greatest impact at a time when our community needed it most.”

In addition to his leadership at the NKY Chamber, in his role at Republic Bank, Tilmes has used more than 30 years of industry experience to assist business professionals with their banking needs. A graduate of the University of Cincinnati, he currently serves as Board Chair for the Covington Business Council and chairs the council’s Membership Committee and started its networking group. He also serves on the Business Support Committee of the St. Elizabeth as Vice Chairman

Previously, Tilmes served on the Advisory Committee to the Department of Economics and Finance at Northern Kentucky University, and he was also a founding board member of the Northern Kentucky Emergency Shelter Center.

However, it was his volunteer work that really helped him understand the needs of the community, which has enabled him to better serve his customers and the market.

“Tom’s experience and pride in the local market continue to strengthen his passion for reinvesting in the community,” said NKY Chamber President & CEO Brent Cooper. “Through his work with Republic Bank, various business and civic organizations, and his many volunteer efforts at the NKY Chamber of Commerce, Tom has helped create a better community for his customers and all of us in Metro Northern Kentucky. The NKY Chamber is pleased to thank Tom for his leadership and dedication to this region and those who call it home.”

Individuals interested in learning more about the NKY Chamber Community Awards, sponsored by First National Bank of Kentucky, or in submitting a nomination, should contact Lynn Abeln at labeln@nkychamber.com.