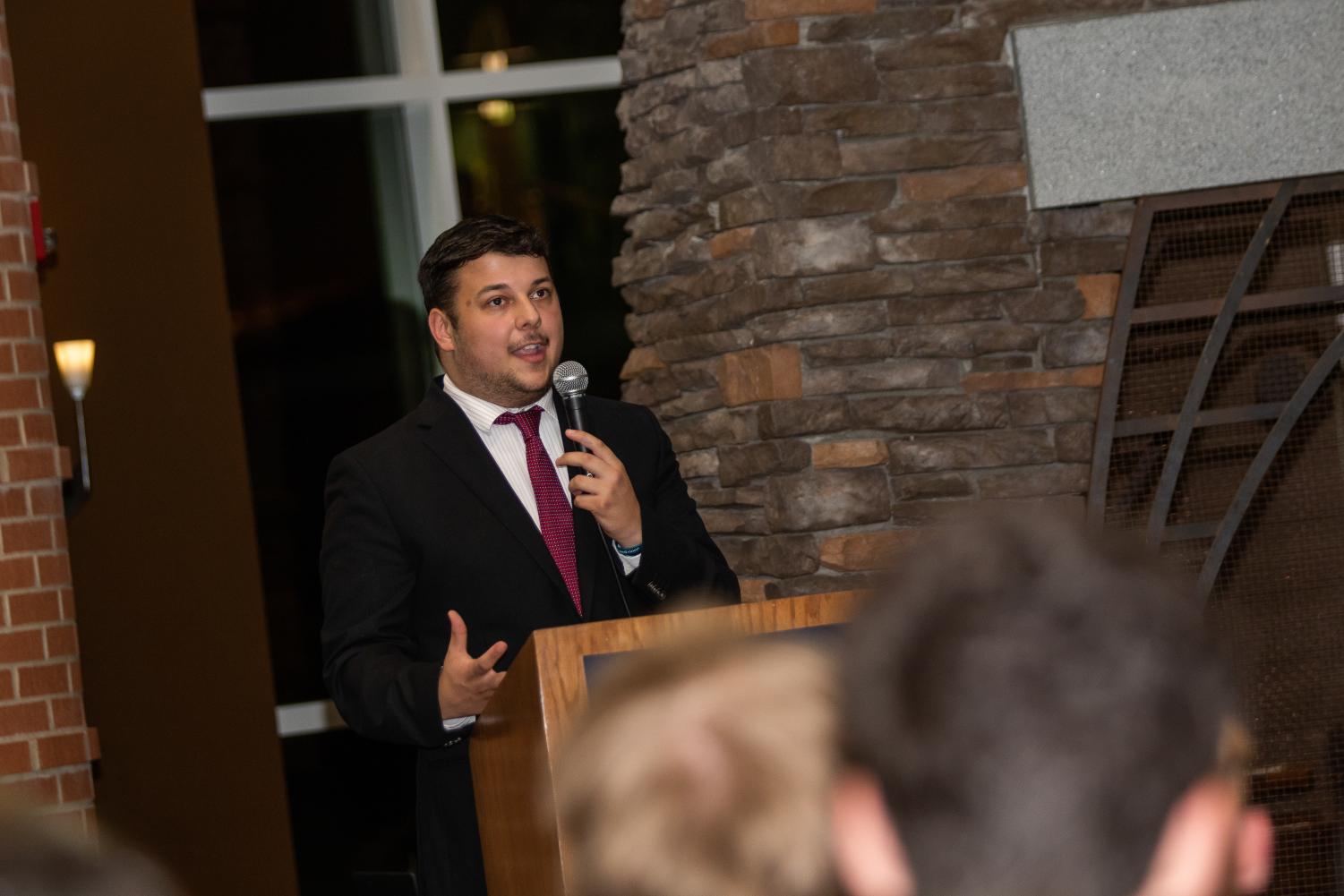 This year was the fifth annual debate and has been moderated by the Quinnipiac Political Science Association.

Zachary Foti, a first-year political science major who represented the Republican side, said the topics discussed were valuable and timely issues. He said there were civil interactions on both sides of the debate.

“I think it was a very well-rounded debate overall, covering different aspects of issues in today’s world,” Foti said.

When it comes to the Democratic side, Paul Cappuzzo, a political science and economics double major and president of the Democrats, said the debate showed both sides respected each other.

“I think you can still disagree with people and get along at the end of the day,” Cappuzzo said.

Being able to find common ground in today’s intense political climate is beneficial to both sides because they were able to have a successful discussion, said Miles Ellsworth, a junior accounting major and Republican treasurer. Ellsworth entered the debate hoping to learn more about the other side and maybe even change his mind.

“I think it’s nights like tonight, I think really give us all hope for the future, and hope that we can really unite our country,” Ellsworth said.

Nearly 8 in 10 Americans say Republican and Democratic voters cannot agree on basic facts, according to 2018 data from the Pew Research Center.

One of the topics discussed was whether the United States should support Ukraine in The North Atlantic Treaty Organization. Democrats stated how NATO has helped fight conflicts and terrorism around the world, which is why it is important for NATO to allow membership for Ukraine.

“The organization’s primary goal is to guarantee the freedom and security of its members political and military,” said Stephanie Suarez, a senior political science major and board liaison.

Republicans argued that if Ukraine were admitted to NATO, the US would have major economic and military consequences.

“Hasn’t the US already helped Ukraine enough?” said Thomas Taheny, a first-year economics major. “We have spent $54 billion to defend Ukraine and the Russian invasion.”

The parties were then questioned as to why there is a double standard for supposed safety when it comes to the issue of censorship. Republicans debated the issue of social media and the First Amendment to the Constitution, which deals with freedom of speech.

“This is basically a tool that big tech companies use, and with influence from the government, to control who gets a platform for what they think is appropriate speech and conduct,” said Kevin Alston, a junior business analyst who represents the Republican side.

The Democrats’ argument centered around social media platforms being mostly private companies and regulating four types of speech: hate speech, obscenity, misinformation and harassment. While the First Amendment protects people from government censorship, social media does not have to adhere to the same standards.

“Whether it’s a celebrity like Kanye West or a political figure like Donald Trump, social media platforms have every right to censor what a person says when they spread obscenity,” said Taylor Byo, a first-year graphic and interactive design major.

Democrats’ arguments focused on the notion that abortions will always happen and making them illegal creates an unsafe and possibly deadly situation for women across the country.

On the other hand, Republicans argued that a federal abortion ban would help promote safe sex and that life begins at conception and not when the child is born.

Democrats and Republicans also debated prescription drugs and whether doctors should be more educated about the prices of the drugs they prescribe. While both sides agreed that the price of drugs was an important issue in the United States, the parties disagreed on how to fix it.

Money spent on health care and related activities reached $4.1 trillion in 2020, which is $12,530 per person, according to the 2020 Centers for Medicare and Medicaid Services.

Thomas Taheny, a first-year economics major, argued for Republicans in favor of patient privacy. Taheny noted that it is the doctor’s job to recommend the best possible remedy for a patient’s problem, but it is the patient’s job to understand what drugs they can afford and to ask for other remedies if there are any available.

“I don’t think it’s a doctor’s place to feel the need to have to before every patient has to look at their insurance, how affordable it is for every individual patient,” Taheny said. “I think it’s patient privacy and if we maintain that it should be kept with the patient.”

Nicholas Fizzano, a first-year political science major representing the Democrats, said he wanted a healthy civil debate, which he believes was achieved during his discussion of drug prices.