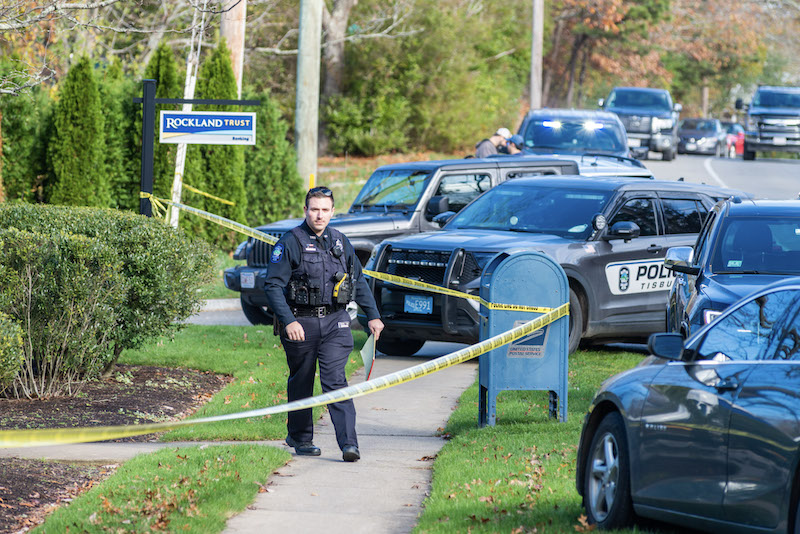 Three armed robbers who held up the Vineyard Haven branch of Rockland Trust remained at large Friday, as officials released photos of the masked suspects caught on camera during the Thursday morning robbery.

In a news release, the Cape and Islands district attorney’s office said federal, state and local officials are continuing to investigate the robbery and are asking for the public’s help in providing any information about the Halloween masks worn by the three robbers. 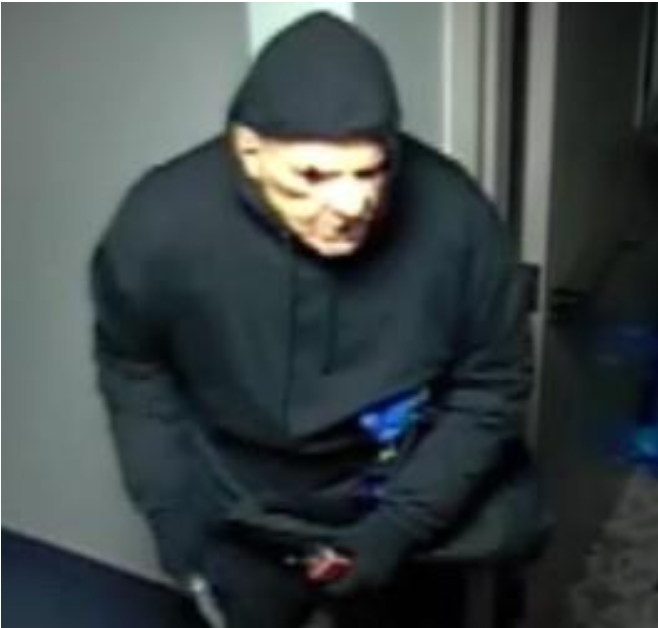 The release said Islanders should continue to be vigilant, but emphasized that the crimes were targeted.

“Islanders…don’t worry too much. This is a targeted crime and no additional information should cause undue fear,” said the statement, issued late Thursday.

The robbery happened at about 8:15 a.m. Thursday at the Rockland Trust bank branch off Vineyard Haven-Edgartown Road. Police said three masked and gloved men armed with handguns rushed into the bank as employees entered to open the bank for business.

Tisbury Police Chief Chris Habekost said the three individuals tied up bank employees before fleeing in a stolen vehicle owned by one of the bank tellers. The vehicle was later found on Barnes Road near Manuel F. Correllus state forest.

A spokesperson for Rockland Trust said that no bank employees were injured in the robbery.

“There were no injuries and everyone is safe,” the spokesman said. Bank branches remained closed Friday, although other Rockland Trust branches reopened.

Tisbury police confirmed early Thursday that an armed robbery took place, but could not say how much or what was stolen.

“I am not at liberty to disclose it at this time,” Chief Habekost said. 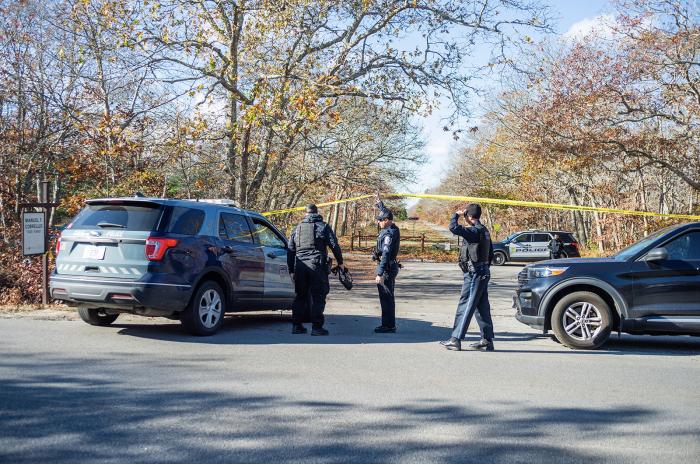 Police and sniffer dogs also investigated outside the entrance to the state forest bike trail Thursday.

Lieutenant. Bill Brigham with the Tisbury police department said the suspect was wearing a black hoodie and a white mask, but could not provide further demographic details about the suspect. Police are analyzing video footage from the bank Thursday morning.

“With a hoodie and a mask . . . it’s really hard to get a physical description,” said Lieutenant Brigham. “The important thing is that nobody got hurt.”

State police confirmed they had brought in dogs to help with the search.

“We have detectives and crime scene personnel responding and are preparing to transport a K9 team to the Island via our Air Wing,” state police spokesman David Procopio said in an early update. 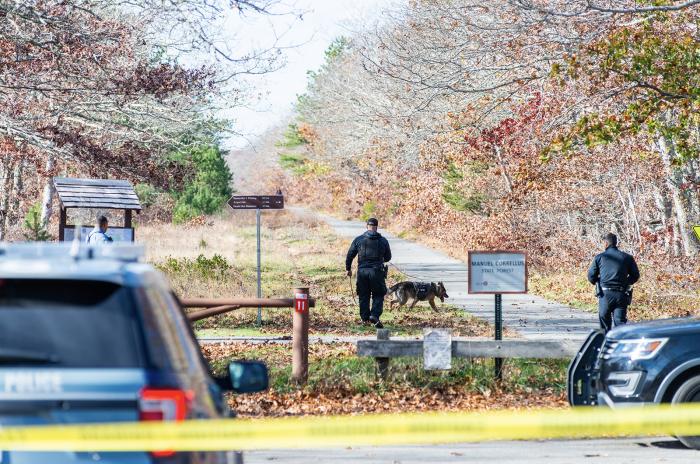 In a strange turn of events early Thursday afternoon, police who had gathered at the Falmouth Holiday Inn in search of the suspect later confirmed that their investigation had turned up no leads related to the bank robbery.

According to a report from the Falmouth Enterprise, the search in Falmouth took about five hours, starting around 10:00 a.m. when SWAT team members, FBI agents, armored vehicles and K9 units were on scene at the hotel. Falmouth police Chief Edward Dunne said in a brief press conference that the investigation turned up no leads.

“Some information developed through the investigation led us to this hotel today,” said Falmouth Police Chief Edward Dunne. The investigation “concluded that the suspect was not here,” he said.

Chief Habekost said that the search at Martha’s Vineyard is still ongoing.

“These three individuals, if anyone sees them or suspects they saw them, please do not approach them,” Chief Habekost said. “Call the police. They are considered armed and dangerous.”

Steamship Authority ferries were running as normal throughout Thursday, according to SSA spokesman Sean Driscoll. Mr Driscoll said the ferry service had not received a request from the police to stop service. 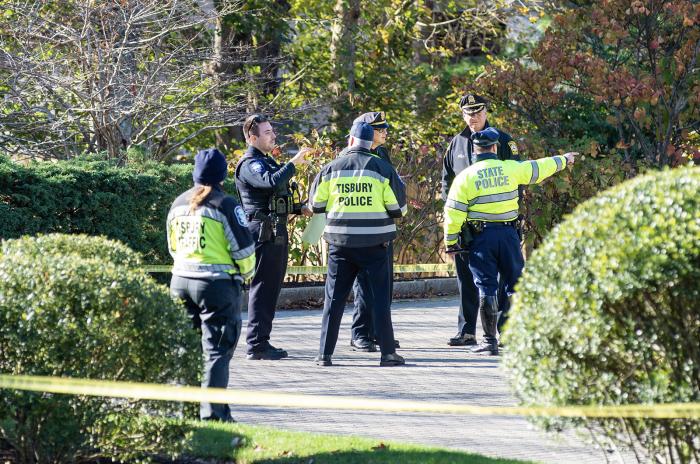 The suspect is still at large. — Ray Ewing

All bank customers at the premises were ordered to remain in their cars while the investigation continued Thursday morning, although no customers were in the building at the time of the incident, police said. A man remained pinned to a drive-thru window for several hours at the scene Thursday morning.

“I can’t leave my car,” he shouted from his Volkswagen.

“He was a good sport,” Tisbury Sgt. Andrew Silvia said. “We’re trying to get him out of here as quickly as possible.”

The Martha’s Vineyard school superintendent’s office issued a notice shortly after the robbery that the school would be closed.

“There has been an incident in Tisbury,” the notice read. “Out of the abundance of caution the school will take refuge in its place.”

By Thursday afternoon, Island schools announced they would be closing early, sending students home for the day out of an abundance of caution.

At the behest of law enforcement, banks across the Island closed their lobbies after Thursday’s robbery, although drive-thru windows remained open.

State and federal law enforcement officials left the Rockland Trust site around 11:30 a.m. The bank building remained cordoned off with caution tape, as officials from Vineyard Haven continued to describe the scene.

Chief Habekost said late Thursday that the investigation is now in the hands of state police, but the Island police department will continue to assist in the investigation and search process on Martha’s Vineyard. He then took a moment to catch his breath.