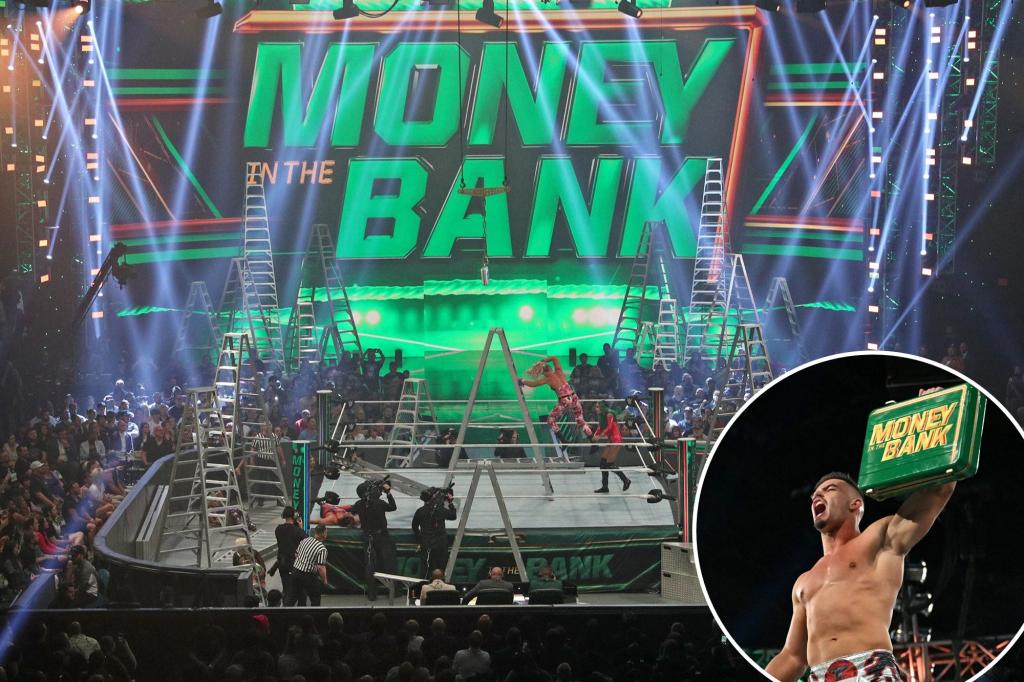 The Post’s Joseph Staszewski takes you around the world of professional wrestling every Tuesday in his weekly column, Post Match Angle.

WWE needs to change its schedule of premium live events in 2023 – but leave Money in the Bank out of it.

Wrestle Votes reported this week that WWE is considering eliminating the Hell in a Cell pay-per-view and keeping the match as a big shot at a big feud as it was originally intended, and the idea of ​​moving the Money in the Bank match to its original home at WrestleMania – one per night – is also still alive with Triple H now in charge.

If such conversations have been or are being had, stay away from Money in the Bank. While I agree that Hell in a Cell pay-per-view should run as well as Extreme Rules, Money in the Bank should remain its own show and there are many reasons why in terms of revenue potential and creative angles.

The Money in the Bank concept should be seen as an opportunity for WWE to create new stars, and standout storylines and legitimate threats for its champions – something it doesn’t do often. And WrestleMania is the closest thing to WWE’s creative cycle with things starting fresh on “Monday Night Raw” afterward. So it comes down to, does it make more sense to crown the Money in the Bank winner at WrestleMania or at a separate show at another part of the year?

If you move the match to WrestleMania, this is a great opportunity to get more talent on the card with eight competitors in each match. But the upside is, the field will likely be lower than usual with some of WWE’s biggest stars already locked in their own WrestleMania storylines. Unless you reduce the number of fights, which can make it easier to know the eventual winner.

By having a match at WrestleMania, you’re really creating an opportunity for someone to win and cash in on WWE’s biggest show or on Raw the next night and headline. But a cash-in at WrestleMania is possible under the current format — and it certainly worked out for Seth Rollins. The biggest creative benefit of keeping Money in the Bank a separate show is that the winner is the talk and headliner of the night and for weeks to come. Think Liv Morgan, Nikki ASH, Austin Theory and even Otis in the beginning. The briefcase holder – except for the cash in – will feel pretty secondary to anything that happens over the two days of WrestleMania. If you want to create new stars and new champions during WWE’s dull creative cycle, then segregating Money in the Bank is the way to go.

Then there’s the fact that Money in the Bank has been WWE’s fifth biggest show – maybe fourth for a few years with how poorly Survivor Series was handled. Why throw all that away without trying to find a way to better monetize it? WWE tried to make it a stadium show this year but had to move it from Allegiant Stadium in Las Vegas during the highly competitive international fight week in July to the smaller MGM Grand Arena two months before the show. WWE may have to explore the logistics of moving Money in the Bank to September or October where Extreme Rules and Clash at the Palace this year and work with teams to host it at MLB stadiums on Saturdays when the teams are away.

So if you’re keeping Money in the Bank by yourself and scrapping Hell in a Cell and Extreme Rules — because mixing hard-type matches on regular cards makes them feel extra special— what do you do to fill those slots on the calendar? (This would be easier if NXT — in an attempt to win the Wednesday Night Wars — hadn’t claimed Halloween Havoc, Great American Bash and In Your House.) You’d need three or four new shows if Day 1 stayed off the calendar because it would conflict with College Football Playoff.

First, you could bring back King of the Ring in place of Extreme Rules in October or as an early-year Saudi show, alternating with Elimination Chamber in February and March. I will be ready for WWE to do UK/International pay-per-views every year in September. Then you bring back some combination of classic Attitude Era shows — No Mercy, Unforgiven, Fully Loaded or Judgment Day — or use WCW classics like Starrcade, SuperBrawl or Clash of the Champions to fill another hole. Or just make a new show named something better than Great Balls of Fire.

Whatever WWE chooses to do, it’s likely to be better than the way it’s done now where Hell in Cell and Extreme Rules matches dictate creative instead of creative dictating when those types of matches are needed. But leave Money in the Bank alone, it’s the best.

NXT did a great job of debuting Ava Raine, The Rock’s daughter, Simone Johnson, as the crowd was shocked when she was revealed as the one wearing the red hoodie and the newest member of Joe Gacy’s Schism faction. . They mention he has a new “family” right away in the promo and putting him in a group means he’s smart not to be out there alone running in heels with all the scrutiny he’s sure to get because of his family connections. Then when WWE thinks he’s ready, Raine can free himself from the cult-like split for a babyface singles run.

All Parts of the Plan?

We all know The Firm is bringing MJF to life, but seeing it actually happen still feels like a huge shock. However, it all felt like one big master plan from MJF to make the audience believe he was gone. Her and Stokley Hathaway’s looks give off that vibe in their interactions. While this angle is interesting, AEW needs to get back to the real story that is clear and compelling between MJF and Jon Moxley, the two men who will actually wrestle this match at Full Gear.

Am I the only one at least a little skeptical of another masked Bray Wyatt character in this Uncle Howdy buddy due to the difficulty of booking The Fiend? That is unless Uncle Howdy is Bo Dallas and we get a brother vs. epic brother

Roman Reigns and Logan Paul have done a great job of selling the YouTube star’s viability to shock the world at Crown Jewel. What piques my interest the most is that this feels like most Reigns have rejected challengers.

I’m sure there will be more, but does Tony Khan have Swerve Strickland and Keith Lee beat FTR – in a great match – with a low blow so that the latter is no longer the No. 1 contender. 1 for the AEW tag team championship now and they can come back to this later? Swerve and Lee’s match against The Acclaimed at Full Gear should be their last match together or close to it. Right now, Swerve is better as a heel and Lee as a babyface.

Grayson Waller is the next perfect opponent for the new North American champion, Wes Lee, but enough of all the main roster crossovers. They should feel special and not every week. I do like R-Truth and want to see more of him on TV but Truth’s appearance feels like taking the spotlight away from Lee.

For anyone who’s ever made excuses for a wrestling company’s creative, The Bloodline storyline is a reminder of the magic pro wrestling can create with simple layered storytelling written with a light script and all the performers on the same happy page. “Ucey” will now forever be the thing that bothers me.

Nice to see Emma (Tenille Dashwood) get a second chance in the WWE along with rumors Chelsea Green, Mia Yim and maybe Tegan Nox could also get the same chance. Hopefully, someone will emerge as a much-needed new challenger to Bianca Belair’s Raw women’s championship, or depth is used to rebuild the women’s tag team division.

Johnny Gargano was great in “60 Minutes” segments like WWE Investigates which included reenactments like “Dark Side of the Ring” starring Johnny Wrestling in all roles to expose The Miz for initially paying Dexter Lumis to attack and kidnap him. The witty segment itself should have staying power as a storytelling device in WWE.

After WWE gave us the White Rabbit, AEW delivered a mysterious video of The Elite disappearing from company history as if Thanos had snapped his fingers. It comes after Fightful reports that the band’s return from suspension is imminent. You’d think they’d be back on TV before or in Full Gear, but it’ll be interesting how it’s executed after that video.

Bully Ray’s angle after winning the Call Your Shot Gauntlet at Impact’s Bound for Glory just got interesting. The Hall of Famer has told world champion Josh Alexander he will ask for his title fight the right way and not cash in maliciously. But now, based on his history, he’s suspected of attacking Ace Austin in the parking lot and Moose’s actions, Ray’s intentions are being questioned. He also seems to be struggling with it too. Will he keep his word?

Not sure bringing back the unsuspended version of Nikki Cross only to have her lose her first match – yes to Belair – was really the right call.

Plus: Congratulations to Sheamus and his wife Isabella Revilla on their wedding over the weekend. And our hearts go out to Carmella and Corey Graves after she revealed she had an ectopic pregnancy.

Plus, Plus: Loved, loved, loved WWE shows people dressed up as some wrestlers for Halloween as well as the Chippendale dance that steals the spotlight from Chad Gable and Otis.

Wrestler of the Week

The two returned from a month-long hiatus from TV in a storyline due to an attack by Damage CTRL only to defeat Dakota Kai and Iyo Sky for the WWE women’s tag team championship in the main event of “Monday Night Raw.” The surprise title win makes Asuka a three-time women’s tag champion with a third different partner (Thanks @WWeStats) after Kairi Sane and Charlotte Flair the first two times. Bliss is also a three-time tag champion, previously with Nikki Cross.

Rey Mysterio and Dominik breaking up is probably the best thing for both of them. Dominik is thriving and Rey is fresh during her quest for the Intercontinental Championship on SmackDown. Seeing what Mysterio, 47, and Gunther, 37, pull off in this match should be worth the price of admission for their first meeting – which will be very different from what we see from champion Sheamus. Is this a one-off or the start of something completely new for Mysterio?